Meat-filled Baos with pineapple and jalapeños

Firstly, melt the butter to 40 degrees and mix it with the yeast and the milk at room temperature until it dissolves.

Separately, mix the rest of the ingredients and sieve them.

Add the mixture of milk and butter to the blender, using the accessory for bread, and add the flour mixture little by little.

Once it has all been added, kneed it for 10 minutes at a medium speed. After ten minutes, form a ball from the mixture and leave it to rise for one hour at room temperature.

When the dough has risen, roll it out to 6 mm thickness and, using a pastry cutter, cut it into circles.

Then, brush the circles with a little oil, fold them as if they were tacos and allow them to rise for another 30 minutes.

To finish, steam them on a medium heat with the lid on for 8-10 minutes. Once they are cooked, take them out and leave them to stand.

First, season the meat, cut the pineapple into small pieces and mix it with the rest of the ingredients.

Afterwards, vacuum the meat with the mixture and marinate it for 24 hours.

Finally, drain the liquid and crumble the meat, adding a little juice until the desired succulence is achieved. 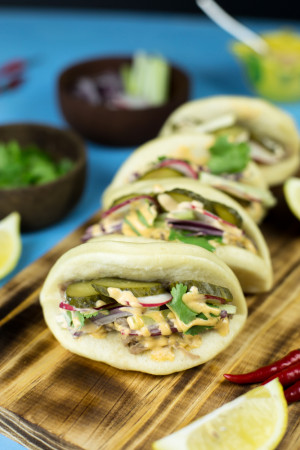 Scallops with Cauliflower and Mustard